Over the last two decades, a woman has held the top political role in Aotearoa New Zealand for eleven of those 20 years. It would be nice to think that we have gender equality, but although it’s getting closer, we are by no means there yet.

Earlier this year, the UN Women National Committee Aotearoa brought together Prime Minister Jacinda Ardern and former Prime Minister Helen Clark for a recorded discussion on a number of feminist issues. This is part of their #Trailblazing125 series of advice from prominent Kiwi women in recognition of 125 years of women’s suffrage in Aotearoa New Zealand.

Helen (yes, we refer to our leaders by their first name) has had a big influence on the mindset of many people irrespective of whether or not you agreed with her politics. It was because of her, that people like Jacinda grew up not considering that gender might be a barrier to the top political job in this country.

It seems to me that what is holding women back (in the NZ context) is not the barriers imposed on them by others, but a lack of confidence in their own ability. There is still something in the way women are conditioned by society whereby they are less likely to put themselves forward for a role than is the case for men. Hopefully that attitude is no longer encouraged.

I stumbled upon this Guardian video clip a short while ago, showing excerpts from speeches at the UN General Assembly by Donald Trump and Jacinda Ardern. It contrasts Trump’s America first with Ardern’s global cooperation and kindness. I think it neatly sums up the difference between the American and New Zealand styles of leadership:

Way back in the 1950s, learning, and participating in aspects of Māori culture and history was part of the curriculum of the primary school I attended. At that time, this was not so common, so I feel blessed that from an early age I understood that Māori culture was a rich part of the cultural heritage of Aotearoa New Zealand instead of something belonging to a pre-European stone age people that no longer had any relevance.

Unfortunately, even today, we find some Kiwis of non-Māori descent who see no value in the indigenous culture of this land, and object to Te Reo (the Māori language) being part of the education curriculum, and Māori culture as something outside what they consider “New Zealand culture”. In other words it has no place in a modern society. I hope I am correct in observing a decline in this type of thinking.

As some 95% of my reader are not from Aotearoa New Zealand, I want to occasionally blog about the indigenous culture that makes this country special, and is having an increasing influence within our society. I have posted a few articles relating to aspects of Māori culture and values in the past, particularly where they have some influence on myself or the wider population, including:
I am a mono-linguist (12 September 2018)
A Creation Myth (17 March 2018)
River gains personhood (24 July, 2017)
Treaty of Waitangi 101 (20 October 2015)
Animism is the established religion of Aotearoa New Zealand. Really? (15 October, 2015)
Our new flag? (1 September 2015)
Farewell Haka (6 August 2015)
Songs that move me (20 March 2015)

Until a back injury forced a early retirement, my father was a physical education adviser for what was then the Department of Education. One of his roles was “on the job” physical education training for primary school teachers, which meant we often saw him only on weekends. He was very passionate about developing a love for activity that challenged both the mind and body. With this in mind, he encouraged both folk dancing and Māori action songs alongside team sports, swimming, athletics and playground games that did not require direct adult supervision.

Rākau are wooden sticks, typically between 40 cm and 60 cm in length ( approximately1.5 ft to 2 ft), while a poi is a weight attached to a string that is then swung in rhythmic patterns. Traditionally poi were made from harakeke (flax) and raupō (bulrush), but today can be made of almost any material.

As a performing art today, both poi and rākau are performed mostly by women. In play, many schools encourage rākau games for both genders and for both Māori and Pākehā alike. To a large extent, my father was responsible for their popularity in the Taranaki and Whanganui regions during the second half of the 20th century.

As a child, I had less coordination than most of my peers, probably related to my undiagnosed autism, and while I found the poi and rākau challenging, I found them enjoyable. I’m convinced that I am not as clumsy as I would have been had it not been for these and similar activities.

Although the video clip below is relatively recent, the chaos is similar to how I remember the activity as a child. Notice the use of rolled up magazines instead of wooden sticks. When learning, they are less painful ! The second video clip illustrates a somewhat more polished performance, followed by the poi.

There are two forms of the poi: the long and the short. The string on the long poi is the distance from finger tip to shoulder, and for the short poi it’s the distance from finger tip to wrist. They are both just as difficult to master, and I never did get the hang of twirling contra-rotating long poi in one hand. The next clips illustrate the short and long forms respectively. Enjoy

I just read a Washington Post article on Trump’s visit to France, and his foul mood with almost everyone. One of the comments on the article came from someone identifying themself as “Just me 2015”. They referred to a sentence within the article:

Trump told aides he thought he looked “terrible” and blamed his chief of staff’s office, and Fuentes in particular, for not counseling him that skipping the cemetery visit would be a public-relations nightmare.

Wait a minute… President TV-Ratings-Genius didn’t realize that skipping out on the ceremony he’d come to attend, the ceremony honoring fallen soldiers from WWI, and blaming it on rain grounding a military-grade helicopter, was going to look bad? I’m shocked! /s

That comment neatly summarises Trumps abilities, not only in public relations, but in practically every endeavor he undertakes.

As my own faith tradition reminds me, the Kingdom of God is not some “other” place that good Christians “retire” to at some time in the future. It is here and now, or at least can be if we, as a community, make an effort to bring it about. We are all capable of making this world a kinder, more caring and equitable place, not by praying or expecting others, even God, to make it so, but by getting stuck in yourself.

As Kiwis, we haven’t done too well in many respects in Aotearoa New Zealand. As Bill points out in his post shared below, childhood poverty in Aotearoa has increased from 11% in 1986 to 25% today. As many prophets have warned (and I’m not referring to those who claim Biblical authority) we are starting to see the consequences of our joint inaction.

As these to quotes remind us, don’t expect God or your deity of choice to bow to your requests through prayer. Choose wisely the prophets you listen to, and then act accordingly to make this world a better place.

“There is little point in praying to be enabled to overcome some temptation, and then putting oneself in the very position in which the temptation can exert all its fascination. There is little point in praying that the sorrowing may be comforted and the lonely cheered, unless we ourselves set out to bring comfort and cheer to the sad and neglected in our own surroundings. There is little point in praying for our home and for our loved ones, and in going on being as selfish and inconsiderate as we have been. Prayer would be an evil rather than a blessing if it were only a way of getting God to do what we ourselves will not make the effort to do. God does not do things for us – he enables us to do them for ourselves.” – Elisabeth Holmgaard, 1984
“The sick and those caring for them have need of our prayers. But let us not imagine … that a few sentimental good wishes from a distance are all that is needed. Whenever we intercede in prayer we must be prepared for an answer which places a practical obligation upon us. A prayer is always a commitment.” – Thomas F Green, 1952

A few years back I recall a TV interview with a man who had survived 11 lightning strikes and lived to tell the tale. The lightning victim’s explanation was that God must therefore have some special purpose for him. I am afraid my cynical reaction was to assume that if whatever that man meant by […] 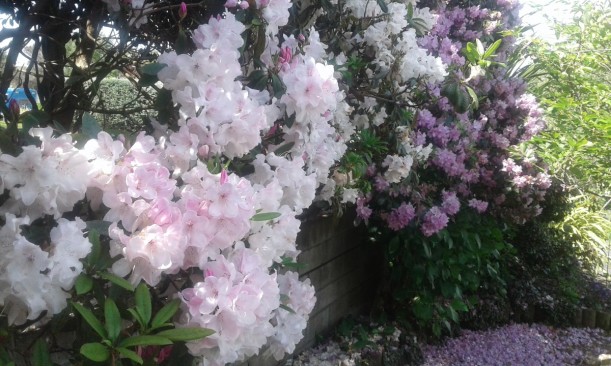 But a real pain in the arse when they’re like this: 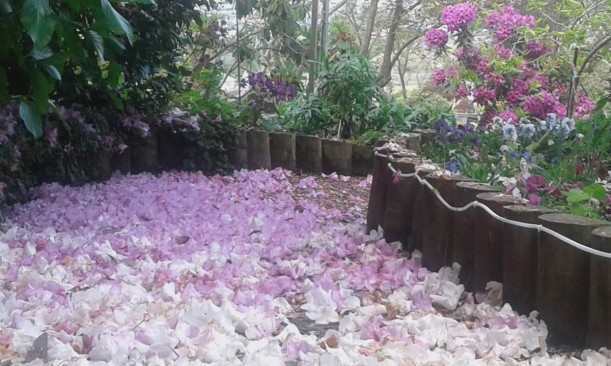 First it was the camellias, then it was the flowering cherries. Now it’s the rhododendrons. Traversing the pathway with its 4 metre (13 ft) rise from the car parking pad to the front door means taking one’s life in one’s hands. At this time of the year it sees no direct sun and after even a little rain becomes extremely slippery. It takes skill to manoeuvre one’s way through this pretty hazard without taking a tumble…

Information about the autism spectrum from autistic people

Beyond the Goldfish Bowl of Christian Religion

with an 84 year old Questioner

Reflections on peace and faith

Come view the world from my loft

A chronicle of fun and fear, or, daily life with my young trans daughter

A Good Blog is Hard to Find

"The World is round and the place which may seem like the end may also be the beginning."-Ivy Baker Priest

life through one female Asperger's lens

Rebelling against a culture that values assimilation over individuality.

My journey to getting a diagnosis, and now for my journey beyond diagnosis 💚

The Wanderings and wonderings of a sentient cloud.