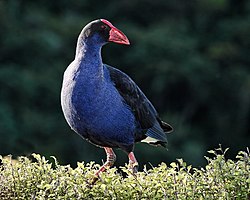 The pukeko is a bird as likely to be seen as road kill as alive and and scratching in a roadside swamp. As you’ll learn if read the original story linked to below, it’s not the most palatable bird around.

Where I grew up there was a well known recipe for pukeko, although no one knew anybody who had actually tried it:

Place a plucked pukeko in the bottom of a very large pot. Place a rock on top of the bird and add enough water to cover both pukeko and rock. The rock must be heavy enough to keep the bird at the bottom of the pot. Place on heat and bring to the boil. Boil vigorously for 8 hours, adding water as needed to cover the rock. Then reduce the heat to maintain a steady simmer and maintain it for 48 hours. At the end of the cooking period, carefully remove the rock and place to one side. Discard the water and pukeko carcase. Carve the rock and serve on a bed of kumera mash with seasonal vegetables. If you make a gravy, do not use the water the bird was cooked in.

For a humorous, and possible more accurate set of instructions of how to cook pukeko, click here for Philip J Bradbury’s Pukeko Pong Pot.

One thought on “Pukeko Pong Pot”

About me, my life and MS

Seeking Dialogue to Inform, Enlighten, and/or Amuse You and Me

Independent views from someone who offers some historical context

A Tale Unfolds
OldLady With Autism

Autism late diagnosis , learning about autism and getting older at the same time.